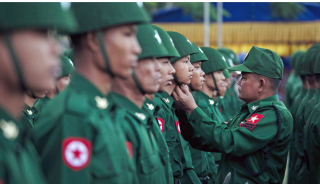 The Myanmar military announced Friday that it would investigate and open court-martial proceedings against soldiers accused of killing Rohingya Muslim civilians during a violent army-led crackdown in the country’s Rakhine state in 2017, the third such case in a country facing international criticism for failing to hold troops accountable for widespread atrocities.

In a move experts said would be unlikely to meet Myanmar’s U.N.-mandated obligations toward the Rohingya, the armed forces said it would probe a government-appointed commission’s findings on killings in Maung Nu and Chut Pyin villages, where about 300 civilians are believed to have died at the hands of government soldiers during “clearance operations.”

The military and the ruling civilian-led National League for Democracy (NLD) government said that the new investigation is not related to international pressure on Myanmar to bring to justice soldiers that ordered and participated in the rampage of random killings, torture, mass rape, and village burnings during the crackdown.

“We have already reviewed the Maung Nu and Chut Pyin villages cases,” said Myanmar military spokesman Brigadier General Zaw Min Tun. “We will work on these cases by forming a court of inquiry, and then we will refer the cases to the court-martial and decide them according to military law.”

“We are working on these cases not because of international pressure, but because of our responsibility and accountability,” he said.

The military did not say when the trial for soldiers who allegedly killed Rohingya residents of Maung Nu and Chut Pyin villages would begin. The military also said it was reviewing other incidents mentioned in the report, including alleged deadly attacks on a group of Hindus by Rohingya militants.

The new court-martial comes about a month after the International Court of Justice (ICJ) — the U.N.’s top court — ordered Myanmar to protect the Rohingya Muslims from further harm and genocidal acts and refrain from destroying evidence of alleged crimes that could be used in later hearings.

The provisional measures order is part of a larger lawsuit filed by Muslim-majority Gambia accusing Myanmar of violating the 1948 Genocide Convention during the alleged expulsion of more than 740,000 Rohingya to Bangladesh amid the crackdown.

Crimes at the very top

Laura Haigh, the Myanmar researcher for London-based Amnesty International, told RFA on Friday that the announcement about the latest court-martial points to an admission of crimes well documented by human rights groups and by a U.N. fact-finding mission that found the country had acted with “genocidal intent” against the Rohingya.

“In terms of the ICJ’s order, what the government and the military are doing will not be enough to stave off what are very, very serious allegations of international crimes, genocide among them,” she said.

Haigh also said military courts are not the answer to holding soldiers who may have committed atrocities against the Rohingya to account, because they are not independent or under civilian oversight. Military courts are unlikely to mete out justice for high-ranking officers who ordered the violence, including the mass rape of Rohingya women and girls, she added.

“It’s also clear that the military justice system is not going to address issues like the widespread rape of Rohingya women that we know was a very deliberate, very calculated tactic of the Myanmar military,” Haigh said.

She also noted that ICOE’s final report claimed not to have been able to find credible evidence of rape and sexual violence, despite widely documented reports by rights groups and the U.N. fact-finding mission.

Both the government and the armed forces have largely denied that soldiers were responsible for human rights abuses and atrocities against the Rohingya.

NLD spokesman Myo Nyunt told RFA that the government had previously denied reports of atrocities because it lacked information.

“We didn’t admit to these cases earlier because they were still under investigation,” he said. “When the ICOE mentioned them, the military accepted its recommendation and tried to investigate them.”

“The government denied them earlier because it didn’t have information…but when the government got the information, it acknowledged them and said it would admit to these cases based on human rights, the rule of law, and justice,” he added.

Myanmar’s armed forces have conducted only two other courts-martial of officers and soldiers accused of committing grave rights abuses during the campaign of violence.

In March 2018, four officers and three soldiers were each sentenced to 10 years in prison for killing a group of Rohingya in Maungdaw township’s Inn Din village, but they were later pardoned and freed by Myanmar’s military commander-in-chief.

In the other proceedings that began in late November 2019, soldiers stand accused of killing hundreds of Rohingya civilians, dumping their bodies in mass graves, and burning the corpses with acid near Buthidaung township’s Gu Dar Pyin village.

The military has disputed the number killed, giving a much lower figure and saying that the villagers died during fighting between government forces and members of a Rohingya militant group.

Myanmar government and military leaders also face legal action on genocide-related charges at the International Criminal Court and in an Argentine court.

A government-ordered internet service suspension in northern Rakhine state, where Myanmar forces are fighting the rebel Arakan Army (AA), is preventing information about any current rights violations by soldiers against ethnic Rakhine or Rohingya living there from getting out.

“It’s very difficult to get information about ongoing abuses by the military,” Amnesty’s Haigh said.

The government reimposed the internet shutdown in five Rakhine townships and in Paletwa township in neighboring Chin states on Feb. 3 amid ongoing armed conflict, after partially lifting the block five months ago.

President’s Office spokesman Zaw Htay told a news conference on Friday that the government has imposed internet shutdowns in Rakhine for the sake of national security and that other countries are doing the same if they deem it necessary.

He said the government would consider lifting the ban the future based on the status of the armed conflict and regional security.

The estimated 600,000 Rohingya still living in Rakhine state meanwhile continue to face systematic discrimination in the form of denials of citizenship, freedom of movement, and access to jobs, education, and services.

Tens of thousands have fled the conflict-ridden region in recent years, many of whom pay human traffickers to transport them to Muslim-friendly countries in Southeast Asia.

Myanmar authorities on Wednesday arrested around 50 Rohingya in Yangon region as they attempted to leave the country for Malaysia, with police searching for others who may have been in the group but fled. They appeared in court on Friday.

Police on Friday said they arrested 14 others in Hlegu township, two of whom have been charged with trafficking.

They join scores of others apprehended in recent months in different regions of Myanmar who face charges for illegal travel and face jail terms if found guilty of violating immigration laws.