France will continue to support for Rohingya repatriation 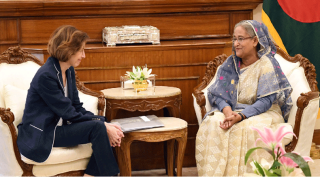 In a meeting with Prime Minister Sheikh Hasina at the Prime Minister’s Office here this morning, the French minister also said her country will continue to support to Bangladesh on the Rohingya issue.

“The international community should create more pressure on Myanmar for repatriation of its citizens from Bangladesh,” PM’s Press Secretary Ihsanul Karim quoted her as saying while briefing reporters after the meeting.

Noting that there are similarities on many issues with Bangladesh, Florence Parly said both the countries are working together in many sectors across the globe, especially in the peacekeeping missions.

She expressed her country’s keen interest to impart training to the students of Bangabandhu Sheikh Mujibur Rahman Aviation and Aerospace University.

In reply, the prime minister expressed satisfaction over the existing cooperation between Bangladesh and France in the military sector and stressed the need for boosting cooperation in the field.

“We’ll be happy to see more cooperation with France in this sector,” she added.

Sheikh Hasina said her government has given highest priority to the training in the defense sector.

Talking about Bangabandhu Satellite-1 which was developed by French company Thales Alenia Space, the French minister informed Sheikh Hasina that it was working as expected.

In reply, the premier said as the lifetime of the satellite is 15 years, the government would go for launching Bangabandhu Satellite-II.

At the meeting, both the prime minister and the French minister also discussed the coronavirus situation in their respective countries and the world.

Sheikh Hasina informed the French minister that three Bangladeshis have been detected with coronavirus (COVID-19) and of the two have returned from Italy.

“All of the three infected persons have been isolated and kept at the hospital for treatment,” she said.

Regarding the celebration of the birth centenary of Father of the Nation Bangabandhu Sheikh Mujibur Rahman, the premier said it will be celebrated in a different way considering the prevailing situation across the world including Bangladesh caused by the coronavirus outbreak.

Sheikh Hasina recalled with profound gratitude the support of the French government, its people and leading intellectuals including renowned novelist Andre Malraux during the Liberation War of Bangladesh.