The focus on William Schabas’ history and personal views detracts from the more substantive issues at play in allegations of genocide in Myanmar. 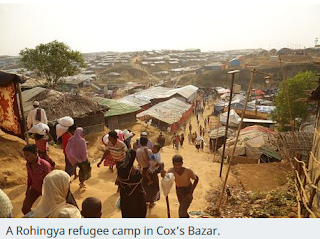 When one of Myanmar’s defense lawyers arrived at Yangon University to give a lecture this weekend, he was greeted by half a dozen protesters criticizing Myanmar for denying accusations of genocide at the International Court of Justice. It was a small turn out to be sure, but William Schabas has become a lightning rod for criticism internationally.

From the moment Schabas was announced to be joining Myanmar’s defense team, he has received an abnormal level of attention. First, a 2013 interview with Al Jazeera was circulated, where he discussed the treatment of the persecuted Rohingya Muslims in Myanmar. “We’re moving into a zone where the word [genocide] can be used,” he said. These comments were used against him by those who said it proved even Myanmar’s defense team knew it was guilty of genocide against the Rohingya Muslim minority. Schabas would later insist this quote was taken out of context.

From there, the comments became more personal.

High-profile activist Maung Zarni called him a “disgraced” lawyer. Human Rights Watch’s deputy Asia director Phil Robertson called Schabas “immoral and two-faced” and accused him of selling out for money. Documentary-maker Shafiur Rahman photoshopped a picture of Schabas to look as if he had aged 20 years after Amal Clooney joined the legal team on the other side.

Fortify Rights this weekend released the full footage of Schabas’ 2013 interview, claiming it was in the “public interest.” Fortify Rights highlighted the fact that Schabas compared Rohingya living conditions in 2013 to Jewish ghettos in Nazi Germany, but overall the video vindicated Schabas and backed up his claim that his comments were taken out of context. In his full comments he is clearly very cautious not to declare whether or not genocide occurred.

“Without answering in a confirmed positive sense that this is genocide — and I should say that I’m always cautious about cavalier use of the term because it does suffer from a great deal of rather extravagant use of the term, precisely because of its potential as a word to get people’s attention. So it’s important not to abuse the term and not to use it unnecessarily. But I don’t think there’s much difficulty in asserting that in the case of the Rohingya we’re moving into a zone where the word can be used even if we have insufficient evidence now to reach any firm conclusion,” Schabas said.

To be fair, even in 2013 Schabas seems sympathetic to the idea that genocide could be occurring or might be on the verge of occurring — and this was before mass violence swept Rakhine in 2017 leading three quarters of a million Rohingya to flee across the border to Bangladesh.

But beyond what Schabas said in the video, the bigger question remains: why should it matter?

Schabas is a lawyer; his job is to put together a legal argument to defend Myanmar from a legal accusation. His personal opinions on the matter are entirely irrelevant to his legal arguments. Human rights observers, international law experts, and pro-Rohingya activists are well within their rights to attack his legal arguments, but the personal insults are misguided and counterproductive.

Schabas is no stranger to this kind of personal pressure. In 2015, he stepped down from the UN Committee investigating Israel for international law violations in Palestine after he was accused of being biased against Israel for past comments he made criticizing the country.

“What someone who sits in a commission or as a judge has to be able to do is to put these things behind them and start fresh and this is of course what I intend to do,” he said shortly before leaving the committee.

In four years of covering the Khmer Rouge trials in Cambodia, I can’t recall a defense lawyer ever being attacked as immoral for defending men who oversaw the systematic deaths of 2 million people in four years. There was an understanding that a defense team is an essential part of the international law process, and a guilty verdict without a robust legal defense is useless.

Four current and former presidents of the International Association of Genocide Scholars also put out a statement, demanding that Schabas (himself a former IAGS president) step down from the case.

“The effect of any defense of Myanmar is to further Myanmar’s impunity for killing, sexualized violence, displacement, and destruction of the Rohingya people,” the statement says.

That is true and does much to explain the severe reaction.

In the case of the Khmer Rouge and the Nazis, international justice began after the crisis was over. But the Rohingyas continue to be oppressed today and are vulnerable to a recurrence of mass violence. They live in camps that have been described as open air prisons, they are denied citizenship, they drown while trying to flee the country in boats, they are arrested and jailed for leaving the camps, and they are still being killed by the military in Rakhine. The case against Myanmar at the ICJ has already produced results — Myanmar admitted to committing war crimes (but not genocide), the first time the country has acknowledged such grave human rights abuses. Undoubtedly, a genocide conviction at an international court would increase pressure on Myanmar and potentially lead to even more progress.

Another key distinction may be funding. Where the Khmer Rouge defense lawyers were paid by the UN, Schabas is paid directly by the Myanmar government. Receiving money from a rights-abusing regime to deny its crimes definitely feels problematic. But the human rights activists have yet to propose an alternative. If Schabas steps down, what next? What is the ultimate goal? Will they mount a similar pressure campaign on his replacement? Should nobody represent Myanmar at the ICJ? Or will they be satisfied with a slightly less talented defense team?

For the genocide trial to be credible, it must have a strong defense team. Genocide is a complicated legal term with a narrow definition — there’s no guarantee that Myanmar will be found to have committed this crime. While there is much evidence that Myanmar committed genocide, the verdict is not predetermined.

From what we have seen so far, there are enough holes in Myanmar’s legal arguments to avoid focusing on personal attacks. Ultimately, shifting the focus away from legal debates onto Schabas himself only serves to potentially undermine the credibility of the trial, not strengthen the case against Myanmar.